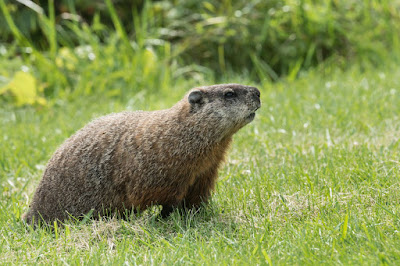 This isn't "Thing" but it looks like him, if he's a him. :)
We've had a resident groundhog for several years. I decided to name him, "Thing!" I think because at first I didn't know what it was...and when I name something, it sticks. :)
I have seen him eating clover and whatever usually in the back yard but sometimes in the front. He checks out the seeds and corn, too, that I throw out for the birds and squirrels.
He lives under 2 sheds in the back yard - there are holes in a few different places, even under the chain link fence (ex-dog's yard) next to the shed near the house and another to get out the other side. :)
So...I happened to look out the back door window this morning and saw on the deck what I thought was a strange cat near one of the flower pots...at second glance I knew it was "Thing!" What a surprise! :) I have never seen him on the deck before - I didn't know groundhogs climbed stairs! I would think I'd have seen him up here before this. He was eating at the coleus! I didn't care...the flowers are on there way out for the summer...but I was concerned because not all plants or flowers are good for animals. He was really loving it! I asked my husband for his camera so I could get a picture, but it wouldn't have been clear enough through the window so I quietly opened the door to get a better one and of course, he ran quickly down the stairs! I haven't seen him since.  : (
I'm getting a new phone tomorrow and will be able to take pictures more often...oooh...hope I can get some cool pics for my blog and FB. :) I may be the only person entertained by my posts but what the heck? :) I'm having fun!