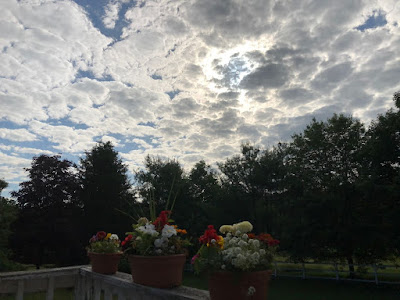 I have 3 metal chairs on my back deck - the one I sit in against the house, this vantage point, but this picture wasn't taken today. Another chair is across from me and home to a pot of purple and white petunias. The 3rd chair is against the house to the left of the door which is home to my tray of succulents. It's a coolish breezy morning but the sun is hot on my legs and so it was a good time to give my "friends" a drink and a shower!  :) 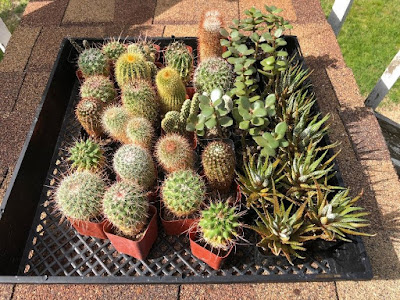 They were on the roof of "Tabby Cat's" house in the left front corner of the deck the day I took this picture. Unless it's raining or too cold, they go out every morning. And starting today, so will I. 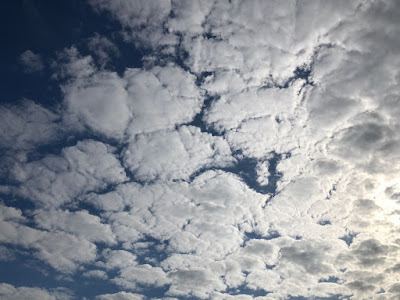 Clouds are more than fascinating!
After watering the succulents I sat in my chair - I had nothing urgent waiting for me so I sat and looked up at the clouds and realized that once you recognize an animal or an angel or a man with a mustache, and lower your gaze for 3 seconds...it's too late. You won't or rarely again find what you saw those few seconds ago. It has already become something else. Some of what I saw were dog faces, a few cats, an illuminated angel/Holy One as it moved closer to the sun, a woman wearing a turban, a couple of Santa Clauses (haha), a monkey, two lion's heads, many eyes of hurricanes, two children in a bed with covers up to their chins, and while all that was blowing by from the breezes aloft, I watched two planes come and go. This time I waved at both. :) Don't know if anyone waved back. (yesterday, a helicopter flew by and I was too shy to wave, but not today) :) The first plane was loud and I knew it was coming, but the second was silent and silver and only knew it was there because I was looking in its direction. Maybe it was a UFO...I wished it had been for a minute..."take me for a ride," I said silently! :)
I looked at all of my flowers and along came what I first thought was a dragonfly, which would have made me happy, but at closer inspection it was a hummingbird flying from flower to flower...I was in awe and smiling following its movements. :)
Look at what I would have missed had I not sat out on the deck this morning. It brought me simple enjoyment and now I know I will crave that kind of experience every time I go outside to enjoy the nature in my surroundings. I will always look up to the sky and the heavens being reminded by the fleeting moment that I saw a puppy and smiled when the cloud cat looked like my, "Chloe." :)
Is that life? Fleeting? Changing and transforming from one thing or being to another - except that it takes us a lifetime to be that one being and takes clouds only seconds.?