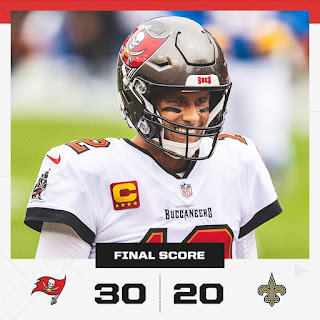 Tom Brady
What a great game yesterday against the New Orleans Saints! Two future Hall of Famers, Tom Brady and Drew Brees are and have always been good friends who respect each other. 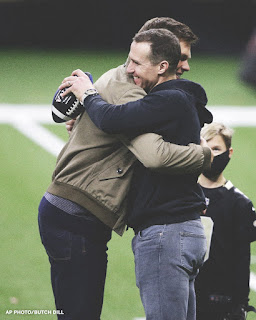 Tom Brady and Drew Brees
It was Drew's last game - he has chosen to retire.  A playoff game, Tampa Bay goes to Green Bay next Sunday to play for the National Football Conference Championship. You can never, ever count Brady out!  It's just not possible. His first year with the Buccaneers who haven't even been to the playoffs in 18 years, TB12 has already taken the team well inside the playoffs with the possibility of a trip to the Super Bowl!  Not unfamiliar to Tom - he has 6 Super Bowl rings he earned during his 20 year career with the (our) New England Patriots. Whatever happens we are proud of Tom Brady and will be watching every game next year, too, as the networks are following his continued career with the Bucs and are so happy we can follow Tom every week!  The picture above was taken after the game...two good friends who played football against each other in college...a fitting game between them as Brees retires from the game - he's 18 months Tom's junior. It's refreshing to see what "respect" looks like during these already difficult times.
We love you, Tom! Good luck, Drew!