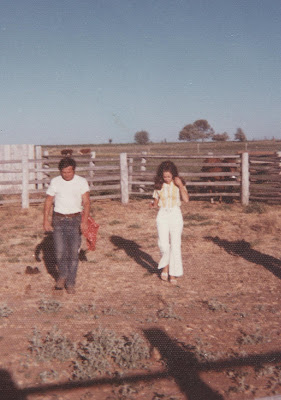 "Jack & Myself"
Good Times in Idaho - 5 miles South & 1/4 West
( walking around the old homestead )
Once in a while I get the urge to Google someone from my past, as I Google myself sometimes to see what comes up. So I Googled an old friend from the time we lived in Idaho, Jack Goodman. After so many years have passed, we have been out of touch for most of them. Just wondering how he and his family were I found a link that mentioned him as a poet and his book of poetry published in 2009, "Wind Songs from Turtle's Back." I was not that surprised as Jack was always a deep person who was always quiet and in deep thought, an inward person, so it didn't surprise me at all that he was writing. I read that he was also now a cattleman and had moved from our old farm house 5 miles south of Jerome...they rented it from us so we could buy a house in town. We became close friends after that.
I later went to amazon.com to search for his book and was thrilled that they had 2 left! I ordered it right away and it arrived in the mail yesterday. :) I didn't read cover to cover, but read the first few pages and back cover, then flipped through it stopping and reading poems that caught my eye or soul, as his poems were about his experiences and life with wild and domestic animals of the great northwest. Since I knew Jack and I lived in Idaho for 5 years, each word I read was very special as I visualized him writing and felt close to him once again as a friend, being there as he watched his failing dog, felt the hot steam from his cup of green tea, felt the wind blowing snow in his face as he fed his cattle, and in the canoe down the Snake River witnessing the birds flying over.
His poems touched my soul, and old memories came flooding back to that old farmhouse we both lived in and picturing his new farmhouse as they have moved away where he raises his cattle. Thinking of Jack sitting on his porch looking at the canyon walls makes me very lonesome for Idaho again. It owns a piece of my heart. The 5 years I lived in Jerome were probably the best years of my life. I can't be there except in my mind, and I can be there in my dreams and thoughts, and love the land and friends that meant so much to me.
"Wind Songs from Turtle's Back" has now become one of my sacred books, and Jack, you will remain a good friend in my heart forever.
Posted by Nancy at 8:46:00 AM